Pardon me in advance if I don't explain all the cultural references.  That's what Google is for, right? 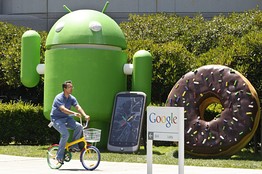 Google's Android is the heart & soul of the iPhone's competition.  Android, I will explain, is the operating system behind all of the Droid-based smartphones that attempt to do or better what Apple provides with its industry-leading and iconic touch phone.  And Google has given us the Android character (available for sale, too). 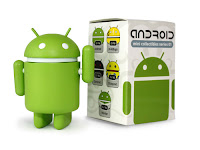 I happened to watch five minutes of the Sony Ericsson Open match between Nadal and Djokovic, when I saw the Android is Ready to Play ad:  youtube Android commercial

The basic premise - having opposable thumbs provides superior facility - is clever, smug, even funny.  It's a great metaphor to imply that Android has evolved to the next level. 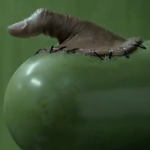 However, Sony's ad is darkly funny - to the point where it will probably be pulled.  The implicit theme, that someone lost their thumbs for Android's gain, is made explicit with a follow-up ad, The Donor:  youtube Android commercial The Donor

It reminded me of a Nike ad for its new soccer ball (of which I cannot find a picture - yet).  Imagine, a soccer goal - post, net, green grass and white lines - punctuated with two arms firmly grasping a Nike ball, but sitting inside the goal.  Add that the arms have been dismembered from the owner, as the ball could be hit hard enough to rip the arms off the goalie.

Anyhow, Android may be a bigger monster with its thumbs.  Did I mention the operating system behind virtually every iPad competitor is Android?  See a threat to any other operating systems?  If only there were apps to replace Microsoft Office....
Posted by Help for the PC No comments:

Help for the PC