Got an email that isn't quite what it says it is.  Is Comcast really alerting me to unlock my account?  No!  A screen shot of this email appears below.  This is a phishing scam and it's also known as spoofing - it looks official, but it is truly fraudulent at least and possibly malicious as well.

http://Xwww.kcaer.re.kr/zboard/data/yy.php
So - anyone care to go there, test it out?  Be prepared for a virus or some sort of malware at the least, and perhaps the need to reformat your hard drive.

The email sure looks official, including the sender's address: 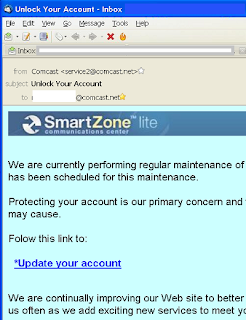 Posted by Help for the PC No comments:

I can't help but hear Andy Rooney's voice from 60 Minutes as I begin....

Do you ever notice the address for facebook.com?  If it doesn't begin with "https://" then you're not getting all the protection that facebook has to offer.  If it begins as "http://" then your connection is more vulnerable to hackers and identity thieves.

This issue is much more critical when you're on a public or semi-public network, like connecting at Starbucks, or your hotel room or lobby, or even the library.  When you're at home, you only have to worry about your kids hacking your facebook surfing - and maybe your neighbors, if you have a good wireless signal. 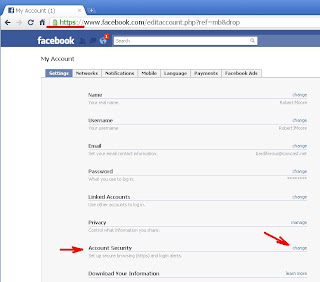 Pretty easy, huh?  Be careful, though;  you start telling people that you know how to do this and they'll anoint you as the computer expert!


The fine print:
Note that facebook changes its interface occasionally, so if you're reading this in the year 2013, the settings and options might be different.

https://www.facebook.com/editaccount.php?drop
Posted by Help for the PC No comments:

I Never Thought Apple Would Win on Lower Price!

I never, ever thought I'd say this.  Apple is cheaper than the competition.  But I'm saying it now, at least in the iPad/Slate/tablet arena.
I've been a PC guy from Day 1.  Even though my first PC experience on an Apple II was successful, and one of my old neighborhood buddies owned one of the first Macs (what's that worth now, Steve?), I became a PC because that's what was at work.
Here's a good read on the improved iPad:  http://www.zdnet.com/blog/mobile-news/ipad-2-announced-original-ipad-price-drops-tablet-game-over/1200
And another, where Samsung concedes that they need to go back to the drawing board - fast:  http://www.zdnet.com/blog/hardware/samsung-on-the-galaxy-tab-we-will-have-to-improve-the-parts-that-are-inadequate/11757?alertspromo=&tag=nl.rSINGLE
Posted by Help for the PC No comments:

Curious about the Future of PCs?

What's coming? Faster. More wireless. For the Future as of today, scroll down toward the bottom of this post.


The Future, as of 1992
Back in the early 90's, I quietly spoke of an email service that would mimic standard mail service - pay as you send (PAYS). Would it reduce or eliminate spam? Well, maybe the phishing scams. But if you look at the world of junk mail, you'll see it is an industry unto itself. I didn't call that one right - people would rather have free email. And junk mail will arrive, free or at a cost.

Now, This Year - What We Saw

At CES 2011 - that's the Consumer Electronics Show monstrosity in Las Vegas every January, which showcases new technology that's mostly cutting edge - Motorola showed off a cell phone that would connect to a laptop shell.

Here's the Atrix, with it's optional LapDock;  so you'd carry your cell phone and then plug it into this laptop-like docking station with keyboard and large screen. No more PC. Or, your phone is your PC.
Let the bleeding edge go out and buy it now. You can find it at Best Buy - I saw it online today for $199.99 with a 2-year contract with AT&T. The Laptop Dock is also at BB for $399.99.
I wonder if Windows Live SkyDrive and Microsoft Office Web Apps will work seamlessly on these Android based phones. Well, I'm not a beta tester, nor will I go out and buy one just to see if it works. There may be some compatibility issues and that's my caveat emptor.
The Future of the PC

How many of you want to get rid of the cables? The good folks that write the standards for our handy computer technology have been working toward a new, fast, wireless standard. No cables for:
Coming Soon - Like, Next Week

Apple & Intel have introduced Thunderbold, a new port that is 10Gbps fast - twice as fast as Wireless USB - but it has cables.
Now, USB 3.0 has been around for a year, but PCs and devices are only now showing up in in retail outlets. SATA2, SATA3? It should be around for some years to come, but don't expect ESATA to make a big dent, just like FireWire never delivered in volume. My money is on USB. For now.
So - faster & wireless? Or, even faster yet, but with cables? That is the ques...; no, that is the future.
Posted by Help for the PC No comments:

Help for the PC